Since I distrust centralized services such as Spotify that can delete content you love at any time they like, I’ve always bought my own music and have a huge collection. But there’s no denying that streaming music to any device or location is a useful feature. You still don’t need Spotify for that, thanks to the FOSS community you can build your own Spotify-like streaming system, and this guide shows one combination of software to accomplish this.

The goal: Stream your music collection from your own PC (or NAS or whatever storage you have) to any web browser, mobile phone and desktop clients.

The method: A little Linux magic involving the following components:

Setting up the server

We’re going to set up mpd to run inside your own user account. I’m assuming you already have a Debian server set up and the following is true:

Install the required components (as root or with sudo):

We are disabling the system-wide mpd because we want to run our own user-level MPD instead.

Switching to your normal user, create some required directories:

Then stick this in your ~/.mpdconf:

Try to start MPD now. It should start and log any problems to ~/.mpd/log:

To make this persistent through reboots, try to add a crontab to you‘s cron with crontab -e:

Controlling MPD and streaming to your desktop

To verify that everything is working and to reward yourself with some streaming audio, try to install a desktop MPD client. On Linux, I recommend Cantata because it has streaming support built in. Unfortunately, the Windows version of Cantata lacks this feature. On e.g. a Debian 9 desktop, you can simply install the package:

Start it, then go to Settings > Configure Cantata… > Collection and add a new collection:

My media server’s hostname in the local network is simply “media”, replace that with your own. Make sure to adjust the port to 6601 because that’s what we set up earlier. The stream URL in this case points to port 8000 because the local network surely has enough bandwidth for the lossless stream. If you want the lossy one instead, use port 8001.

Once you click “Apply” you should be able to choose this collection under Music > Collection.  If the connection succeeds, Cantata probably automatically triggers a database update (it will show “Updating database”). This can take a while depending on how much music you have.

Once it is finished indexing, you should see your music on the left. Drag some albums to the playlist on the right and press play. If the player stays at 0:00 or if there is an error connecting, check ~/.mpd/log on the server to see what’s wrong. If the player plays but you hear no audio, make sure the streaming button (headphones indicated in the screenshot below) is clicked: 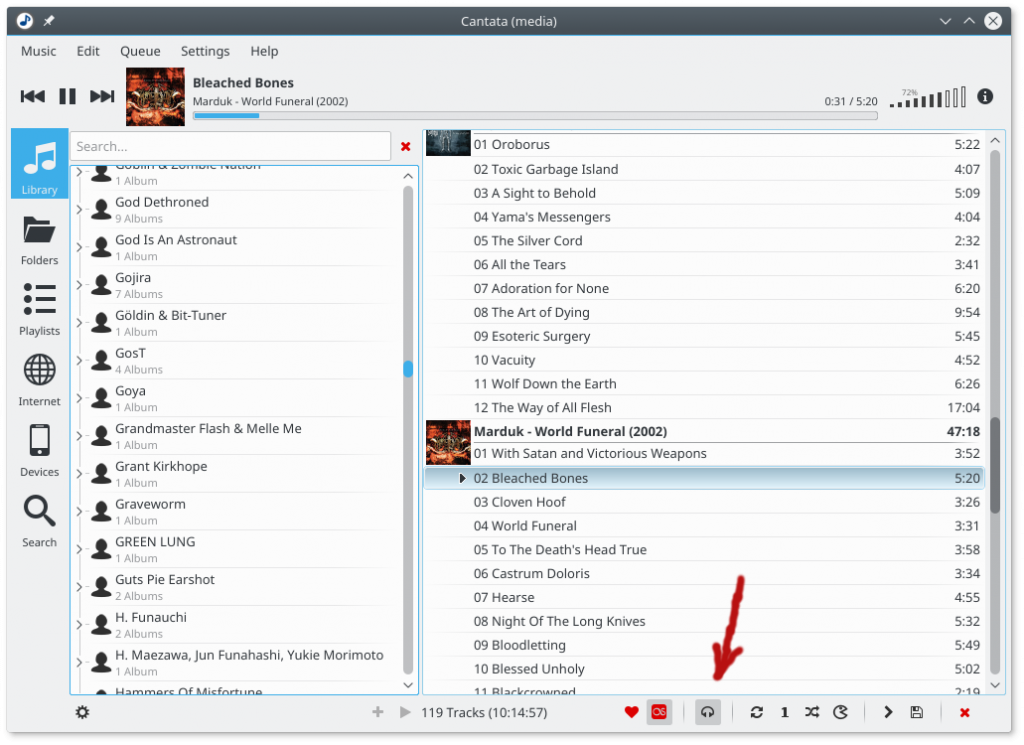 Congratulations, you now have a streaming server for your home network! Now let’s make this mobile.

Natively, this only works on Android. Install ConnectBot and M.AL.P..

We use ConnectBot to connect to your home server and to forward some ports so you can control it and stream via the same encrypted connection. Setting this up is not too hard:

After you start M.A.L.P., you’ll ned to set up a connection to MPD. Since we’re using the tunnel provided by ConnectBot, the address for the server will be appear to be localhost. Go to the hamburger menu in the top left and under “Settings” find “Profiles”:

If everything goes well, you should already be able to control your MPD server this way. To also start streaming, press the three dots menu in the upper right and select “Start streaming”:

Now you should have your entire music collection available to stream to your mobile device.

You could of course also skip ConnectBot and SSH by opening the MPD control and streaming ports directly to the Internet, but I wouldn’t recommend that. Who knows who might find your streaming port, and suddenly the copyright mafia shows up at your door because you were operating an unlicensed web radio.

Controlling MPD and streaming to most devices using any web browser

The final step is perhaps the coolest, you use a web-based player so you don’t have to install anything on any clients. This way, you can ruin people’s parties by streaming your choice of 80s German schlager to any available device.

On your media server, as root (or using sudo), install Python’s pip package manager and then websockify:

Change to your normal user and go to its home directory, where you unpack the latest version of Bragi-MPD:

You should end up with a directory called Bragi-MPD. Change to it and copy the example config file to your own custom config file:

Edit the file and change the streaming and control ports:

Now hook it all together using websockify:

If you point a web browser at the address of your media server on port 8800, you should see what music is currently playing and the current playlist. Plus, if anything is on, you should already hear the music. For me, that address would be http://media:8800 at home. What I haven’t done yet is put port forwarding in place and added SSL and a password, but I’ll leave that to your imagination.

To make this persistent across reboots, you can do something this in a crontab entry for you using crontab -e:

If I am ever not too lazy to add the instructions for SSL and passwords, I’ll update this article. Until then, enjoy your homemade streaming.